The Men of Penetang. Part 3: Autumn 1916 Preparing for War

In the fall of 1916, the men of Penetang were filling out wills and preparing for war. The training was probably getting stale and as the weather turned cold, the anticipation of living in canvas huts for the winter probably made them think going to war wasn't so bad. However, that was far from the truth.........

While the men were filling out wills, Charles Thompson Darling was battling on the Somme. On September 11th, 49 tanks were ordered to move to the front lines. 17 of the tanks never made it (mechanical issues), 22 more failed to proceed on zero hours of the raid of mid-September 1916. The Princess Patricia Canadian Light Infantry gained 2 kilometres. But Charles Darling lost his life, and Charles Darling Jr became an orphan.

Canadian Soldiers ready to go over the top at Flers-Courcelette

The Battle of Flers-Courcelette, 6771 men died on that day alone. Charles Thompson Darling was one of them. The son of James Darling, postmaster at Penetang. He was 27 years old, a widower when he enlisted in Toronto. He was part of the University outfit, named the McGill Units made up of those enlisting on university campuses. Charles lists postmaster as his profession and was tall at 5'9" tall.

He is reported to have died and is buried, about 1000 yards North West Of Courcelette.

Percival Egerton Harvey was born in Canterbury, England on December 26, 1891, to Philip and Eliza Harvey, of St. Paul's Canterbury, Kent. He was one of four brothers who served, two of whom fell. He was brought up Anglican. Mr Percival Harvey enlisted at age 23 at Niagara Camp and was initially assigned to the 76th Overseas Battalion, eventually absorbed into the 58th Battalion, Central Ontario. He had prior militia experience with the 35th Simcoe Volunteers. His sign-up papers describe him as a single labourer, 33” chest, 5’2” tall with a fair complexion, light brown hair and grey eyes. He had tattoos of anchors, flowers and shamrocks on both arms. Ninety-five Canadians died (early in the war for Canada) on September 20 1916. Private Harvey died at Flers-Courcelette. “Killed in Action. While on duty with a ration party near Courcelette he was instantly killed by an enemy high explosive shell.” He is remembered on the Vimy Memorial.

The four-month Battle of the Somme was fought from 1 July to 18 November 1916. Allied commanders sought to relieve pressure on the French defenders of Verdun to the south by inflicting heavy losses on German forces farther north and drawing German reserves into the battle. (From Gerry Duffy)

The Canadian War Museum describes it below:

The joint Allied offensive planned for French forces to play a prominent role, but heavy casualties at Verdun reduced their ability to participate. As a result, British and other imperial forces, under the command of Sir Douglas Haig, assumed responsibility for most of the front.

The German defenders along the Somme had constructed deep dugouts that were difficult to find, much less to destroy with artillery fire. Many of the hundreds of thousands of British shells fired before the attack were inoperative “duds” due to quality control problems in their manufacture. Others lacked fuses sensitive enough to explode on contact with barbed wire, which further reduced the bombardment’s effectiveness. Because of this, many German machine-gun positions and dugouts remained largely unscathed, and deep rows of barbed wire uncleared.

Allied Soldiers at the Battle of the Somme

British troops went “over the top” on 1 July 1916 expecting, after the fury of their own barrage, an easy walk onto the German lines. They were met instead by terrible fire from rifles, artillery, and machine-guns seemingly unhurt by the bombardment. The first day of the Somme battle was a disaster, with nearly 60,000 casualties.

No Canadian infantry units participated in this attack but, at Beaumont Hamel, the 1st Newfoundland Regiment, attached to a British division, was cut down on 1 July by German machine-gun fire as it attacked over open ground. Within 30 minutes, the regiment suffered a crippling 324 killed and 386 wounded out of a total of 801 soldiers.

The First Day of the Somme

The first day of the Somme was a catastrophe for the British Army and a shock for all the Allies. Despite the limited Allied gains, German forces had also suffered horribly. The British pressed the attack for months, well into the fall. By the time the battle ended, each side had suffered more than 600,000 casualties.

The Somme as Historical Controversy

The Somme was one of the war’s longest attritional campaigns and remains a source of great historical controversy. Critics suggest that ineffective and callous British generals ordered their soldiers forward in fruitless and costly attacks, giving them neither proper weapons nor effective tactics to break through the enemy trenches. Other historians further suggest that little more could have been done at this stage in the war to achieve victory and that the attrition of German troops along the Somme eased enough pressure from the French at Verdun to ensure the Allied front did not collapse in 1916. French demands for help, they argue, forced the British to attack before they were ready. Without enough heavy artillery or shells to suppress enemy fire, the British suffered staggering casualties.

The Somme was a costly stalemate that led to harsh criticism of Allied commanders, especially Haig, and German determination to avoid similar casualties by altering their defensive systems. In the fighting of 1917, improved Allied assault tactics would face deeper, more sophisticated German defences.

George Travelled to Europe on the Empress of Britain

Twenty-four-year-old George Morin’s time in the war was not going well either. George was 5'4" tall with a dark complexion, black hair and hazel eyes. In late July, George was on the front lines when on patrol he found wounded men and after carrying them to the trenches became separated from his battalion. George stayed with the 10th for a day or two eventually returning to his unit. When the company packs arrived, George’s pack wasn’t there, as he had been reported missing. This left him desolate, upset he wandered off. George, a French Canadian, found himself at home in the bush. He knew the language so he proceeded to walk about the countryside. Hunting and scrounging, he lived in the french countryside for about a month, before being apprehended, still in uniform, by military police near St Omer. George was court-martialed, found guilty of desertion and sentenced to be shot. His sentence was commuted to five years of labour and placed in confinement.

George Morin, charged with an offence that carried the death penalty, was not given legal counsel. He would defend himself in the proceedings and probably had no idea what he was doing. George didn’t call any witnesses and offered only his own testimony.

"I was with the Company in the trenches, about the 10th of July I went out on patrol. After the patrol was over, we had a bad time with a machine-gun fire, and bombs, We got orders to which I got left behind with some wounded men. This was my first tour in the trenches and the others with us, 3 wounded and four unwounded, (illegible writing) what to do.

I got back to the trenches of #10 Platoon with 2 of the wounded men. I reached #9 which was holding the (illegible) trench, I was completely played out. I told #10 about the 5 wounded men, (illegible) and the OC of the 10th.

Then we went out with 2 others to get the other wounded men and got them to B Company trenches. I was with C Company. Then we went back to 10th Platoon proceeded with them the night as they were at rest. Stayed with them for 2 days. In my will to rejoin my unit in camp, feeling pretty bad about my experiences in the trenches, I knew what I was doing but my nerves were coming apart.

The next day we were down to the transport to get our packs and everyone except myself and another man. I did not get my pack, the sergeant took his book out, where it was written G Morin Missing.

This worried me and I lost my head and went off. I don’t know where I went off to, I went away from the trenches. When arrested by the Police, I had recovered control of myself, I was on my way to turn myself in. I had no intention of desertion, there is no cowardice in me. I never thought about when my company was due back in the trenches. I stayed away until arrested by the Police. I lived on Potatoes, (illegible) and bread and slept in the open country.

I went towards St Omer, without any thought of desertion, I was thinking of how I came to leave my regiment.

I enlisted in the 21st of August 1915 and came to BS 7 about 2 months later, or a little more. I joined the 57th as one of a draft from England. While absent I slept under a roof, I traveled mostly across the country by day, sometimes I walked 4 or 5 miles a day, by road. I am a laborer in civil life. I did some hunting by night if there was a moon. I am a French-Canadian and speak Canadian French easily.

I have no friends or relations in Europe. I did not realize how serious it was to leave the regiment. "

George was born in Penetang and had a brother Frederick who also enlisted. His mother Mary was still alive but his father had passed on. He had 2 nephews and a niece (Fred’s children) back home. George would be sentenced to die by firing squad. Mercifully his sentence would be commuted and he would face 5 years hard labour.

William Thomas Elliott was born in Galston, Ayrshire, Scotland on New Year's Day 1897 to Robert and Anne G. Elliott. The family later moved to Penetanguishene in Canada and they raised young William as a Presbyterian. He was an eighteen-year-old student when he enlisted at Niagara Camp on June 3, 1915. He was described as being 5'6", 33 chest, dark complexion with black hair and hazel eyes. He served with the 5th Battalion, Canadian Machine Gun Corps. Private Elliot was killed at age 19 on October 2, 1916, in the Somme region. He is buried in Contay British Cemetery. (Plot 1 Row F Grave 5) His Mother had the inscription added: He died as he lived" 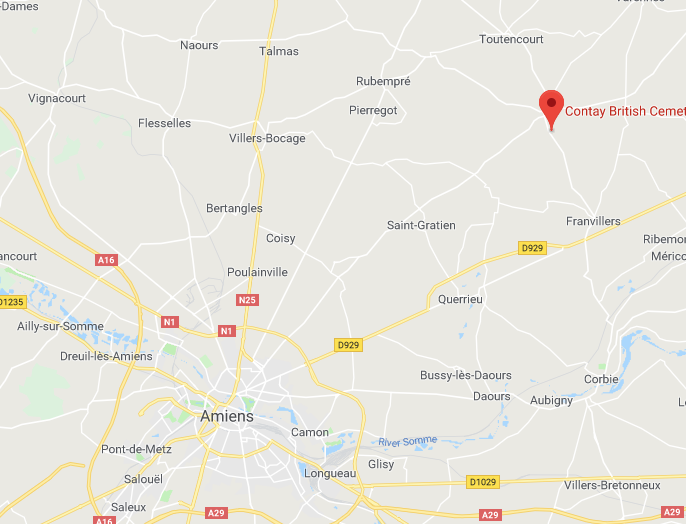 Contay Cemetery in relation to Amiens

For some reason, his Grave is marked William Tivendale Elliott and not William Thomas as in his records.

Below is a link to an amazon book I recommend. George Morin was a member of the 52nd Battalion. The story of the 52 battalions was written by one of its members: copy and paste code

So I have learned that although the recruits were signed up by officers, they were recruited by clergy and women's institutes. The recruiting was pretty competitive, with papers listing the amount recruited and the eligible men left in town. Coldwater tells of only 4 eligible men still in town! I will be writing more about this in an upcoming post, but it's quite surprising the lengths they went to cajole the young men and their families into enlisting. There also seems to have been a trip to Niagara for training. There seems to have been military balls and musical concerts dote in the schedule of the summer and fall.

Charles Thompson Darling: Charles is listed as being honoured on the Vimy Memorial, his Parents are listed as Henry and Charlotte Thompson of British Columbia, so why the name Darling? On his enlistment he lists James Darling as his father, so Henry must have been his stepfather?

William Thomas Elliot: Five foot six inches tall, with a dark complexion, hazel eyes and black hair. His mother had inscribed on his stone"He died as he lived" He was with the Machine gun corp when he was shot in the abdomen.