When you forgot what you bought

The Purchase of Penetang

My ancestors have an amazing story to tell. I feel they have picked me to tell it. So much so I can smell it at times. My family has been in Canada for generations, some parts are even named for my ancestors. They were voyageurs, lumbermen, storytellers, and Metis. Whether it be the fate of the Georgian Bay Metis community or the archaeology of the region. I have viewed it, lived it, researched it, and now write it down, and hope you read it.

View from “The Establishment,” on the hill near Wallace’s Inn, looking toward the head of the bay, and the recently-cleared land on the west side of the harbour. Sketched by G. R. Dartnell, Esq., surgeon of the 1st Royal Regiment, Penetanguishene, Oct. 12th, 1836.

The (first) Purchase of Penetanguishene

The Purchase of Penetanguishene was finalized in 1798. But the story of its purchase starts way before that. It was actually purchased twice, much to the chagrin of those who were selling it.

In 1785, Deputy Surveyor General John Collins was sent by General Haldimand to assess the value of the land they wished to purchase. After the American war of independence, the Great Lakes were now a frontier to the enemy lands in the United States, peace had been found, but peace was often fleeting, so in order to protect its borders, military and naval bases needed to be placed, and Penetang was highly suitable, so its value needed to be ascertained.

John Collins more than assessed it, he bought it, as the chiefs were more than willing to accept whatever value was deemed acceptable, as long as their people were clothed. This parcel of land included what was then called Carrying Place trail along with parcels of land at Lake Simcoe (Lac LaClie then) and in Penetang.

It is also understood that it allows the Crown to make roads through the Mississauga country.

So later, in the 1790’s when John Graves Simcoe made inquiries he received the following response from Lord Dorchester:

“Enquiry has been made relative to the purchase at Matchedash Bay, a Plan...has been found in the Surveyor General's Office, to which is attached a blank deed, with the names or devices of three chiefs of the Mississauga Nation, on separate pieces of paper annexed thereto, and witnessed by Mr. Collins, Mr. Kotte, a Surveyor, since dead, and Mr. Lines, Indian Interpreter, but not being filled up, is of no validity, or may be applied to all the land they possess; no Fraud has been committed or seems to have been intended. It has, however an omission which will set aside the whole transaction, and throw us entirely on the good faith of the Indians for just so much land as they are willing to allow, and what may be further necessary must be purchased anew, but it will be best not to press that matter or shew any anxiety about it.”

So the land purchased and agreed upon was once again in dispute, and the previous purchase was,( if not already), essentially torn up. This left a rather awkward situation, the land was purchased, but never paid for, now they needed to purchase it anew.

In 1798 when it was once again asked if the 1780 agreements were remembered Chief Yellowhead would get the final word….

“Father, If you white people forget your transaction with us, we do not. The Lands you have just now shewn to us belongs to you; We have nothing to do with it; We have sold it to Our Great Father the King, and was well paid for it. Therefore make your mind at easy. There may be some of our young people who do not think so; They may tell your people that the Land is ours, but you must not open your ears to them, but take them by the arm and put them out of your houses…”

Which leads us to….. 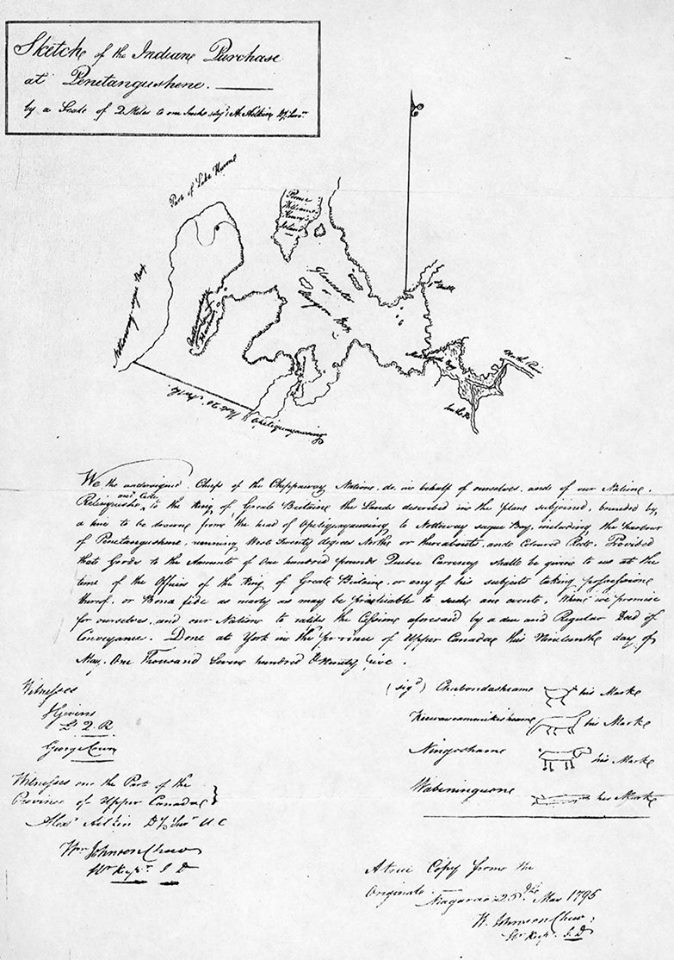 1793, eight years after the original “purchase” and with no payment made, Governor John Graves Simcoe came to view the area of Penetanguishene Bay. With him was Deputy Surveyor General Alexander Aitkin, who would sketch the townsite in 1794.

In 1795, based on the said sketch, it was determined that Penetanguishene would indeed be purchased, but a few more problems stood in his way. Eventually, the purchase was finalized in 1798, 13 years later…..

But that is for another time.

The information above was taken from the publication linked here.

All roads leading to Penetang(A Travelers Guide through Time)