It's maple syrup season, and that was the time the Laramie's and the Lepine's were preparing to make an epic voyage in a small batteaux. In this small boat would be children, livestock and two horses. (Probably a dog?) This along with many supplies and the accouterments needed to start a homestead. They were fortunate, they had a whipsaw and some experience with what they were getting into..

The Many Steps of the Migration

When dealing with the history of the area, the Drummond islanders can’t be forgotten. Far off on the other side of Lake Huron, close to where Lake Huron, the St. Mary's River and Lake Michigan meet, lies an island the British had been using as a military base during the War of 1812. Many fur traders had accumulated there during and after the war of 1812 as they would no longer ply their trade in the US. (Although some would continue to work for american companies.) They needed a place to go and a way to make a living. A settlement was being discussed in Georgian Bay, and likely many were familiar with that area, as the Northwest Company had used it as a portage to York. So they were convinced to move their families four hundred kilometer along the North Shore to Penetanguishene, place of the “rolling white sands”…...

A C Osborne in his work, “The Migration of Drummond Island Voyageurs to Penetanguishene”, gives us a good window into the lives of those who came here, and how they came. Only meant to be a chapter in a larger work, it chronicles a very important part of our local history. Due to the time elapsed between the migration and his work, fifty plus years, comparing it with other research, his work stands up more often than not. Some may be confused by the information, so I'll try to clear it up here.

From Lachine to the Great Lakes

Mr Osborne does not delve into the first part of the “Migration” from Quebec, with the fur trade companies. But that is for another post, I will briefly give a synopsis here.

Many traveled from different areas of Quebec to Lachine where they would board Montreal Canoes and convey trade goods into the interior which would be traded for furs and returned to Lachine. Many, after a few years of travelling back and forth to the interior, would be station on the Great Lakes. Most of those who came to Penetang, had at one point been stationed at or traveled from one of the Great Lakes’ posts.

From these Great Lakes’ posts they would head down to the Mississippi, up the Missouri, or off to what used to be known as Louisiana. Some would also travel to western posts such as Grand Portage and different areas of the Great Lakes.But the war of 1812, and the subsequent merger of the fur trade giants, Hudson Bay Company and Northwest Company meant many of these voyageurs were without an occupation. That coupled with many voyageurs starting families, needed a place to call home.

The British officers realized the importance of these allies, and their alliance appreciated, sought to secure them land near where the military would be moved.

In 1798, land had been purchased around Penetang for a military base. Surrounding land was also purchased for an agricultural community to supply the base. This was something Lord Dorchester had suggested just after the American Revolution. He said that a military base should be surrounded by a civilian agricultural community, which would serve as both a supply base and protection against a flanking maneuver.

So after the War of 1812, with a community surrounding Fort Collyer on Drummond Island, and Drummond Island being declared, trough some coercion, falling on the American side of the border, the ship building establishment at Penetanguishene was slated to be expanded. So with the Military moving to Penetanguishene, Community members sought land, made requests for grants, and those who were accepted received land grants in Penetanguishene. (And no where does it say Discovery, it is not Discovery!)

So the community surrounding Fort Collyer was asked, perhaps coerced, but not forced to move. (They also were not MOVED, the British did not move any civilians not associated with the military)

Here an understanding of the larger situation needs to be understood. These men and women, former voyageurs, traders and trappers of what is now the US of A were without access to what they had once been doing; which on the most part was travelling south. (Some were military or Indian department personnel or attache) In a bias decision, the Hudson Bay Company and the Northwest Company were merged in 1821, many of the French Canadians, especially those travelling south, were out of a job.

A Move is Made

The North route along the shore that the batteaux took, and the southerly route the Brig took. In red is where the schooner was separated and wrecked.

The British having convinced, perhaps coerced, (but did not force), the French-Canadian/Metis voyageurs, along with the native followers (of the British) to move to Georgian Bay. (The native story I will get to in later blogs) But not before the British government would screw things up once again. One and two hundred acre lots were the norms for those who had served, there was plenty of land for this requirement, however after years of war here and in Europe,(Against Napoleon), the British Government was on the brink of bankruptcy, decided to reduce this to 20 acre lots, with payment now a requirement and the usual settler rules applying. (this was one of many changes to recover wealth) One of these rules was a habitable abode and 15 acres cleared in the first 4 years. For one hundred acres this was no big deal. But for 20 acres, this was excessive.

The British convinced the French Canadian/Metis to travel the four hundred kilometers to Penetanguishene. Further, somehow these hardy gentlemen convince their families to board Batteaux and travel 400 kilometers through fairly wild Georgian Bay to Penetanguishene, where land was available.

This move, I believe was done by a consensus of the community, and most of the lots were granted years before they decided to come. Not all came to Penetang, some settled in Pefferlaw, Cheboygan and elsewhere.

Penetanguishene was not the most attractive place, in fact, the British Military was not so convinced as they dragged their collective feet, only leaving very late in 1828 (November 4th) travelling through storms to arrive at the new location of their base on the shores of Penetang. So late, that most of the French Canadians/Metis, would spend the winter on Drummond Island and only make the journey the next year. The British made many promises, it was said Penetang would be a better place etc, but at the time, Drummond Island had many good houses, with root cellars and cleared gardens, so that first year of clearing must have been difficult. Which raises the question of did anyone come early to do this work?

Some of the French Canadian Metis had already travelled to Penetang, in 1827 in Batteaux that may have been purchased after the construction of the base at Penetang. Batteaux were built and loaded in York with supplies for the base so there was probably a surplus. 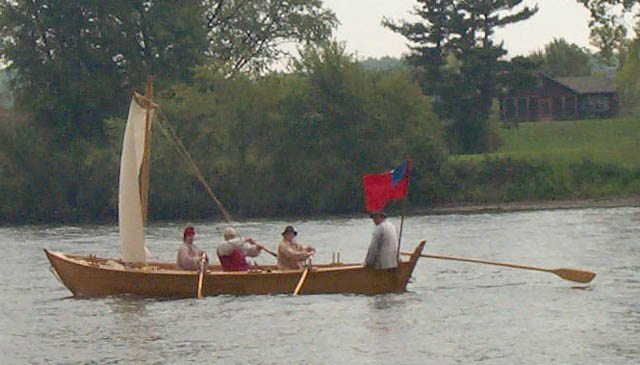 (Labatt’s it is mentioned came before, in the summer of 1827 probably, with many coming the next summer.)

No sawmills existed in this early stage, much of the wood was cut with whipsaws, also called pit saws, with two man working, one on scaffold and another in "the Pit" cutting beams. This must have been very hard work, with a deadline of winter looming.

One of those batteaux had three families, six adults and ten children, along with two horses! I can’t believe convincing the women to have their children and horses together in a small boat was easy, but there it is, in black and white.

These were not the only places that settlers were placed, in fact, some returned to St Joseph Island in the area of Drummond Island a few years later. As early as 1835, a steamboat ran up to St Joseph Island with settlers. Some went to Pefferlaw. All willingly.

There’s more to the story and I will endeavor to get to that in future blogs.